Learn How To Boost Your Fertility 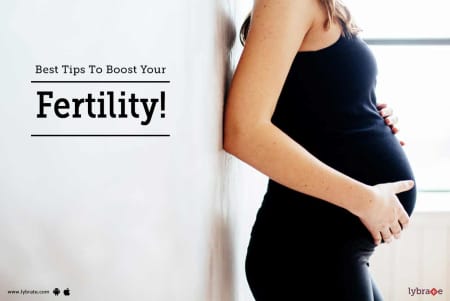 There is no way to predict when you will fall pregnant or not when you try , even though some couples see that positive test just after a month of trying. It can actually help to boost your fertility when it not happening as fast as you anticipated.

If you’re in pretty good health, and having regular sex without birth control, you should expect to conceive in your first year of trying.

But you and your partner can boost your odds of being parents-to-be by knowing the dos and don’ts of fertility. Set yourself up for success with these guidelines.

Him: Keep Tabs on Your Health

Maybe it’s been a while since you’ve gone in for a checkup. Many men, especially younger ones still feel kind of invincible, and don’t routinely go to the doctor.

But there’s a big connection between your overall health and your reproductive health, he says, so making time for a quick health check can go a long way for your fertility.

“Good diet, regular exercise, a healthy body weight, better sleep patterns, less stress — all those things have been correlated with semen quality,” Eisenberg says. Your doctor can help you make any changes you might need to be your healthiest self, as well as address any issues that might be a barrier to baby-making.

Her: Learn How to Read the Signs

All pregnancies start when egg meets sperm. So they need to be in the same place at the same time. To help that happen, you can keep track of when your ovaries release an egg, called ovulation, and have sex during that time frame.

If your cycle is regular (with periods coming 26 to 32 days apart), that may just mean having sex on days 8-19 after your period. If you have irregular periods, you may not be able to rely on the calendar alone to know when you’re ovulating. However, there are other ways your body tells you it’s go-time.

To start, take note of your daily discharge. “Cervical mucus increases and becomes very thin, stretchy, and clear as you approach ovulation,” says Staci Pollack, MD. She’s an OB/GYN at the Montefiore Health System. Watch for a consistency like egg whites.

You can also track your basal body temperature (BBT), which is your body’s temperature when it’s fully at rest. A rise of 0.6 degrees or more for over 10 days is a sign that you’ve ovulated. But your most fertile time is 2-3 days before that boost. When you track it for a few months, you’ll get an idea of when you might ovulate on your next cycle.

For a more precise measure of those pre-ovulation days, you can buy an ovulation predictor kit from the drugstore. It tests your urine for hormone levels that spike a few days before ovulation.

Both: Have the Right Amount of Sex

Once you’ve got a handle on your fertile window, set a good schedule for sex. “We recommend couples have sex about every other day from a few days prior to ovulation until a few days after,” McLennan says. Doing it more often doesn’t hurt your odds, she adds, but there are some studies that show it may lower a man’s sperm count.

As for how you have sex, that’s up to you. Position doesn’t affect your odds of conceiving, and keeping your legs in the air afterward won’t raise your chances, either. “Sperm are pretty fast swimmers, and after an act of intercourse, they can be in the tubes as soon as within 2 minutes,” Pollack says.

Him: Watch Your Testicle Temperature

Love a hot soak in the bath? Tend to hit the sauna after a workout? You may want to cool your jets on these habits while you’re trying to conceive.

“The testicles are a few degrees cooler than the rest of the body, because that’s a better temperature for sperm production, so anything that warms them up can potentially be an issue,” Eisenberg says.

Studies have found that exposure to wet heat can lower your sperm count. And it takes your body 2-3 months to make new, mature sperm.

Another heat source to watch out for: laptops. “They’re less warm than they used to be, but they can raise the scrotum [temperature] about a degree, which is enough to impact sperm production in a pretty short time, sometimes in less than 15 minutes,” Eisenberg says. Play it safe and do your computing on a table or desk.

And how about that age-old boxers vs. briefs debate? Eisenberg says both are fine. “It really doesn’t matter that much. You should wear whatever’s comfortable to you,” he says.

Her: Watch Your Weight

If you’re overweight, you’ll raise your chances of putting a bun in the oven if you slim down. Extra pounds make you more likely to have irregular menstrual cycles, or to not ovulate at all, McLennan says. “Losing even a small percentage of body weight can increase fertility and decrease health risks during pregnancy.”

Being too thin impacts fertility, too. Not only are you more likely to have irregular periods if you’re underweight, you’re also at risk for preterm birth once you do get pregnant, and your baby is more likely to be born at a low birth weight.

Both: Mind Your Medications

Before you get down to baby-making business, review your meds with your doctor to be sure they don’t affect your fertility — or won’t cause harm to a future baby. For example, men who take testosterone may need to wean off, Eisenberg says.

Women should be cautious about testosterone, too, as well as any medications that treat thyroid issues, seizures, or psychiatric disorders, or those that have the hormones estrogen or progesterone, McLennan says.

Birth control pills use these hormones to prevent pregnancy. But if you’ve recently stopped taking them, there’s no need to fret about a post-pill waiting period. Your body should be ready to conceive right away, even if you took them for years. “The length of time you used any form of birth control doesn’t affect your ability to get pregnant,” Pollack says.

And if you’re not already taking folic acid, now’s the time to start. “Taking a daily folic acid supplement not only helps prevent birth defects, it may increase fertility as well,” McLennan says.